Asiago originated in the Veneto region of Italy. This is an aged version, though, as with most cheeses, it is good to eat at any stage of ripening. It can assume different textures according to its aging, from smooth for the fresh to a crumbly texture for the aged cheese. The aged cheese is often grated in salads, soups, pastas, and sauces while the fresh Asiago is sliced to prepare panini or sandwiches; it can also be melted on a variety of dishes. This Italian cheese has a pronounced nut-like flavor; fresh Asiago has a taste that is semi-sweet. With aging it has more of a sharp flavor that resembles Parmesan and Cheddar cheese combined. Because of this, it is also popular used as an ingredient in omelets and sauces.

Colby is an American cheese that comes from Colby, WI. Colby is considered a semi-hard cheese and is like that of Cheddar. It is softer, moister, and milder because it is produced through a washed curd process. The whey is replaced with water during the cooking time, reducing the curds' acidity and resulting in Colby’s characteristically milky flavor. It has a sweet & mild flavor like cheddar but less tangy. You can eat Colby cheese both cold and melted. Its mild flavor and creamy texture make it a great cheese to add to sandwiches, burgers, casseroles, and other foods that call for melted cheese. It is also excellent cubed and pairs well with fruits like apples and pears. Because of its mild flavor, it is often paired with Monterey Jack and sold as Colby Jack cheese. We have shredded it with our Monterey Jack cheese and sell it under the shredded cheese category. It is a great topper on everything. It is a great, fresh-eating cheese and a favorite with kids.

Cheddar cheese is a relatively hard, off-white, sometimes sharp-tasting natural cheese. Originating in the English village of Cheddar in Somerset, cheeses of this style are produced beyond the region and in several countries of the world. It ranges in flavors from mild to sharp and in color from a natural white to pumpkin orange. Cheddar is a favorite with a long tradition. Cheddar is one versatile cheese. Its special texture and taste is due to the “cheddaring” process which is unique to this cheese. Cheddar takes longer than most cheeses to produce, but the effort is worth it. It can be enjoyed at the curd stage before pressing, right after pressing as “farmers cheese” and after several months of aging, when the flavor has had time to develop.

Gouda is a semi-hard to hard-sweet cheese that is mild and pairs well with foods and drinks. I can be eaten with fruit and bread on a cheese platter or enjoyed with a glass of red or white wine. Gouda is also great in sandwiches, vegetable dishes and other cooked recipes. It originated from the Netherlands and is characterized by it’s aromatic and caramel-like flavor combined with its dense and springy texture. Hints of nuts with sweet and creamy notes embrace your palate in a graceful sensation and depending on the age, the finish ranges from smooth to sharp.

Guido's is an Italian hard cheese named after Guido Guintini, who developed it. It is Parmesan style cheese and has a unique taste. It is slightly sharp, not unlike mildly sharp cheddar, but also very complex and layered, a bit fruity, though nutty is the predominant characteristic and most typical descriptive. It leaves a wonderful aftertaste on the tongue. With a bit of honey on top, this cheese is perfect as an after dinner treat. It goes well with a nice glass of Chianti.

Havarti is a popular cheese of Danish origin that has a mild taste and flexible texture, making it very approachable for people who have not developed a palate for strong-tasting cheeses. It can be sliced, grilled, or melted. Lusciously smooth, Havarti is balanced and mild enough to suit all palettes with piquant flavors harmonizing perfectly with salads, sandwiches as well as on its own. Apart from being creamy, Havarti cheese can also be pale yellow in color with a fine texture that is almost like butter. This fine cheese can be served with wine or crackers or even fresh fruits as preferred.

Manchego is another cheese with a very old tradition. Real Manchego is made in the province of La Mancha in central Spain from milk of Manchego sheep. We have made It with goat’s milk and are loving it. It is a semi-soft cheese with a firm and supple texture, It is usually a pale yellow and has a fruity, nutty, sweet and tangy flavor. It has a grassy and pleasant aroma.

Monterey Jack is a semi-hard American cheese. It has a smooth texture to a very mild flavor with a slight sweetness. It is very popular in Mexican dishes, melts easily and is used in many appetizers and snack foods. Jack cheese can be aged for long periods, which allows it to take on the properties of cheese like Cheddar. It melts beautifully, turning smooth and creamy with out becoming greasy or grainy. It goes will with Mexican and Spanish cuisine. It is a great substitute for Mozzarella as it has more flavor. It is in our shredded cheese mixed with Colby cheese. All made right here.

Emma Lou is a mild but so flavorful cheese. It was one of the first recipes that we tried here at the creamery. It is a semi-hard cheese and we fell in love with and named it after my grandmother. It is great in a cheese platter and just to pick up and eat/ It is definitely one of my favorites.

Chihuahua cheese was a cheese made by the American Mennonites and was taken to Mexico by missionaries. It is like a mild cheddar. It is used a lot with Mexican dishes and melts well. It has a milky, slightly salty taste and when aged it is like Cheddar. It is a great for cooking and snacking. It is made to melt smoothly and evenly. Pale yellow in color, its flavor can range from very mild, in between a Mozzarella and a Jack cheese to stronger, like a medium cheddar depending on how long it’s been aged.

Cotswold cheese originated in Glouestershire county in south western England. It is creamy, buttery, sweet and mildly tangy yet full-flavored like Cheddar. The savory taste of chives and onions gives it an extra zing. The color varies from golden yellow to orange and is a firm cheese like cheddar but not as hard. It pairs well with beer, Zinfandel or Shiraz and is popular as a pub cheese in England.

Raclette cheese has a semi-soft texture and buttery flavor. Pairs with crisp, dry wine but a light bodied red wine also works well. The cheese comes from the French and Swiss alps and usually is made from cows’ milk, but we are loving it made from goat’s milk. It is washed in a salt brine during aging and usually ages for 3-4 months. It has a relatively high moisture content for an alpine cheese. This makes an excellent melting cheese, but it can be enjoyed not melted as a table cheese as well. Raclette has an ooey-gooey appeal and is great on burgers, sandwiches and makes a great cheese for fondue. 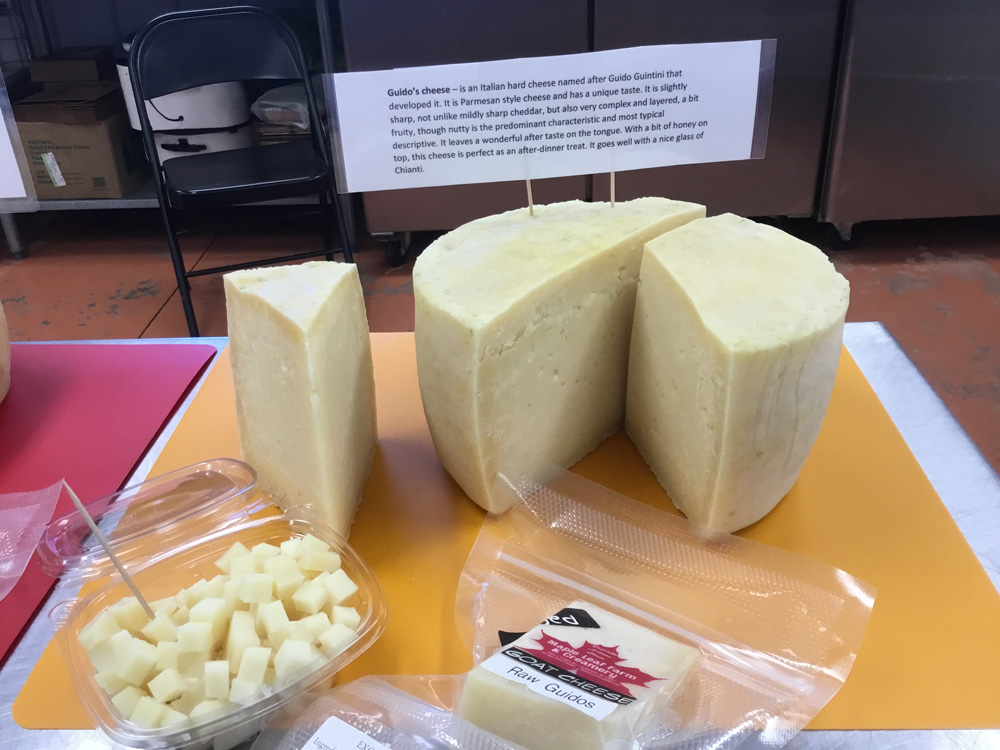 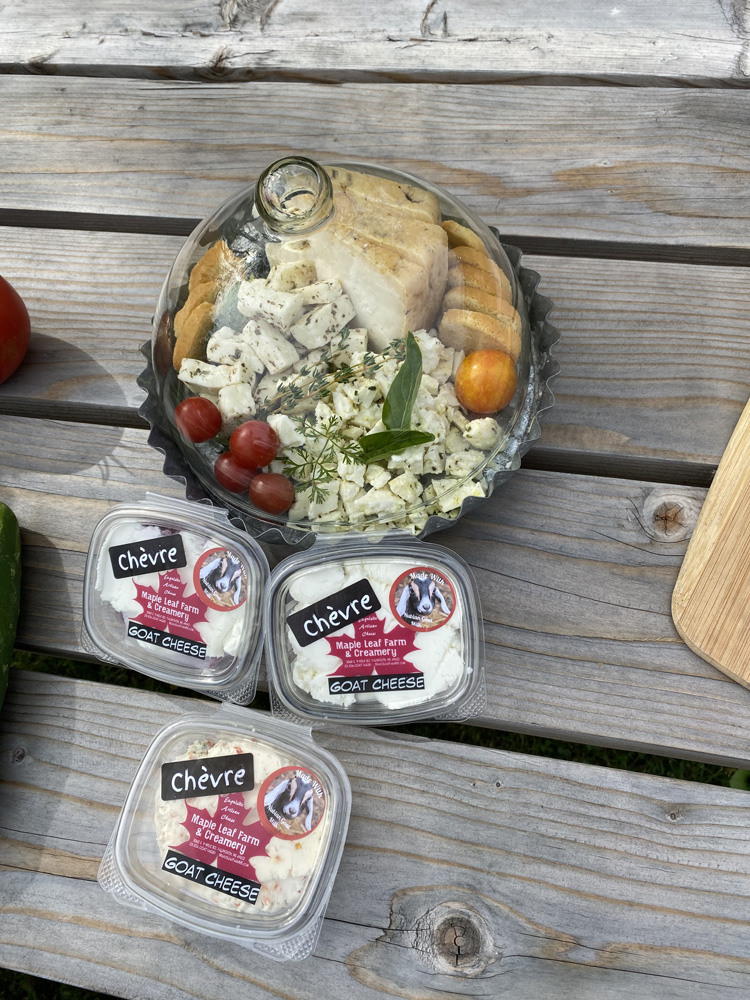 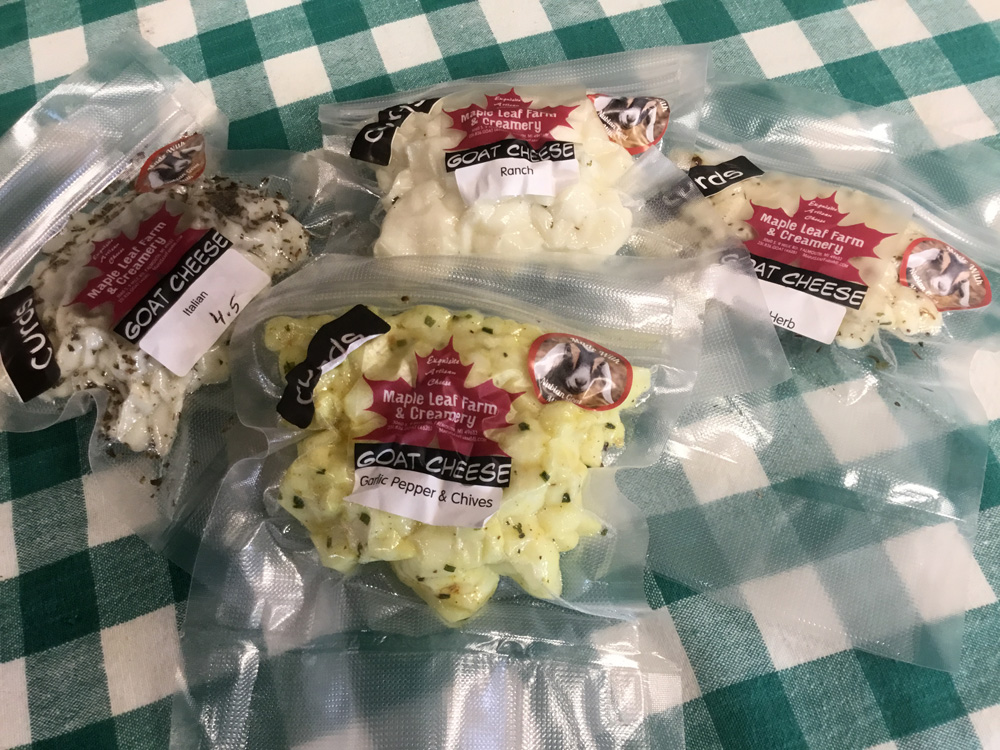 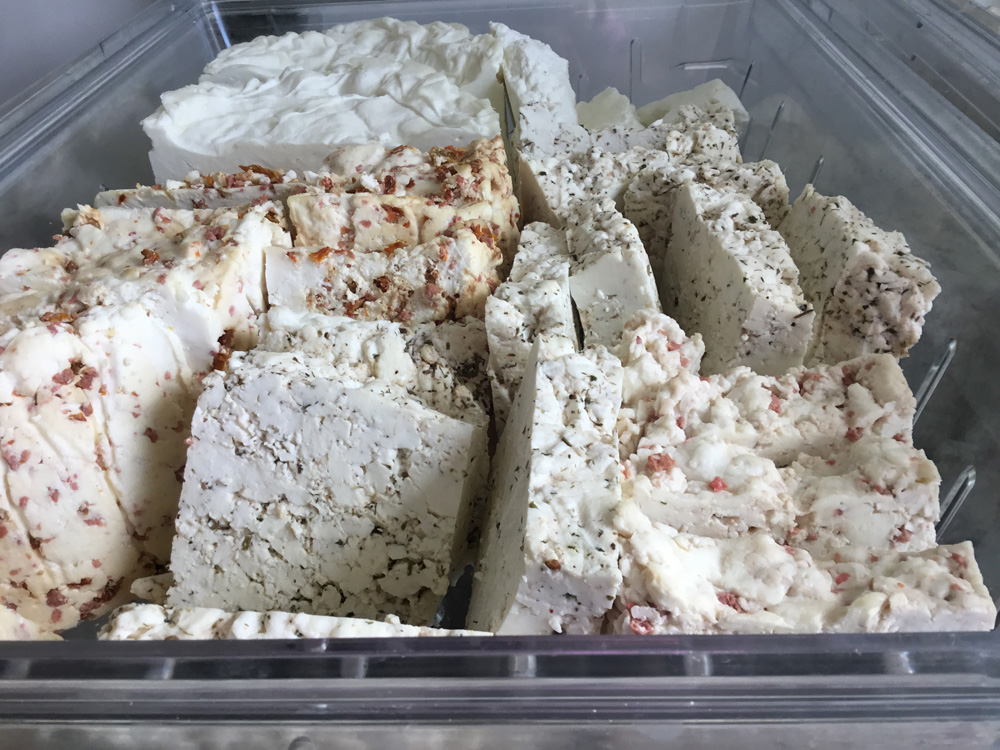 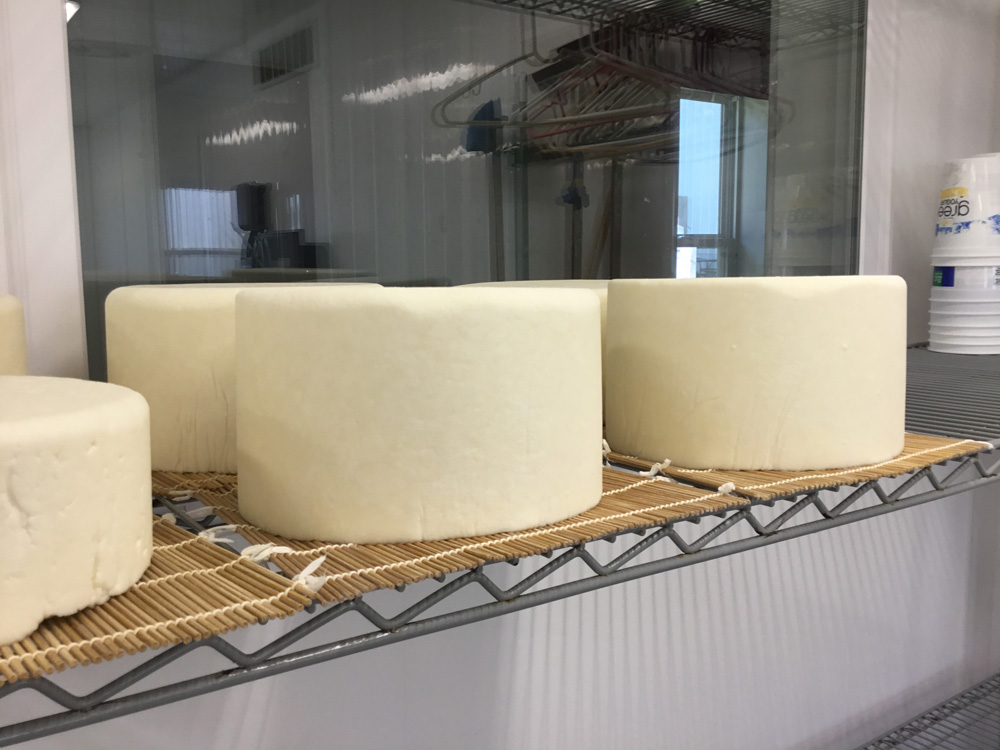 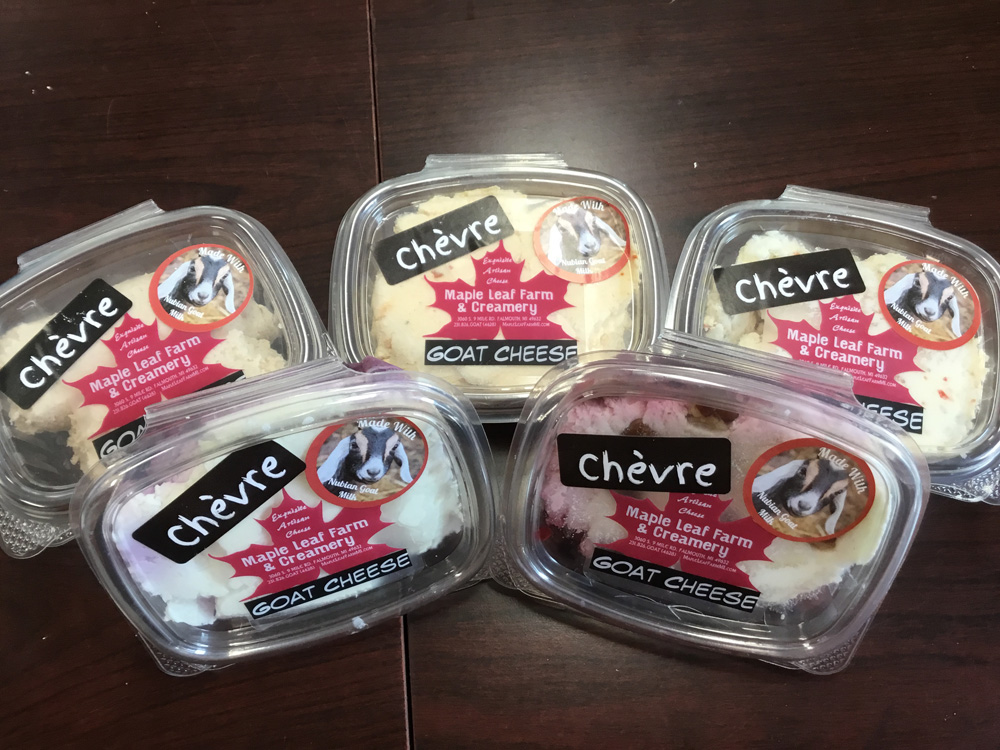 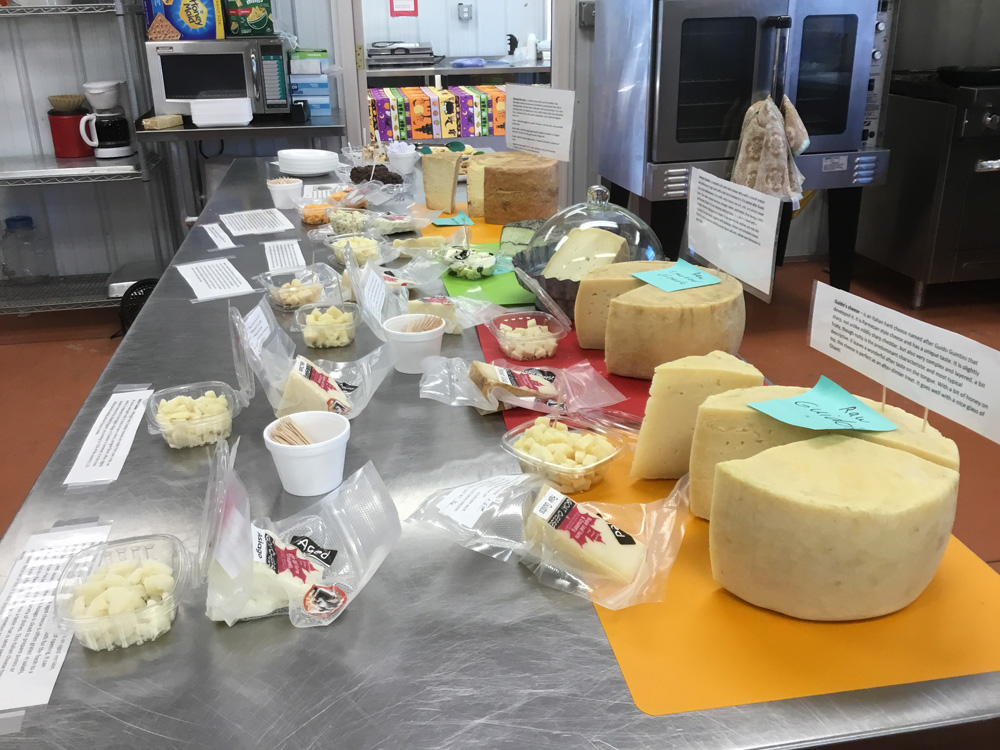 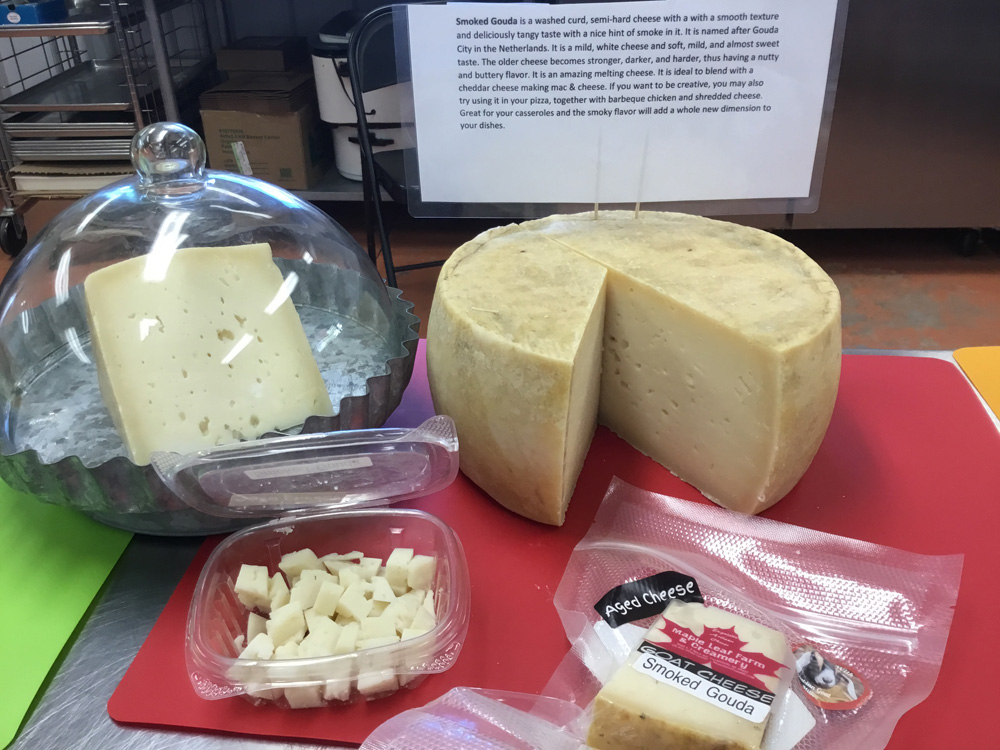 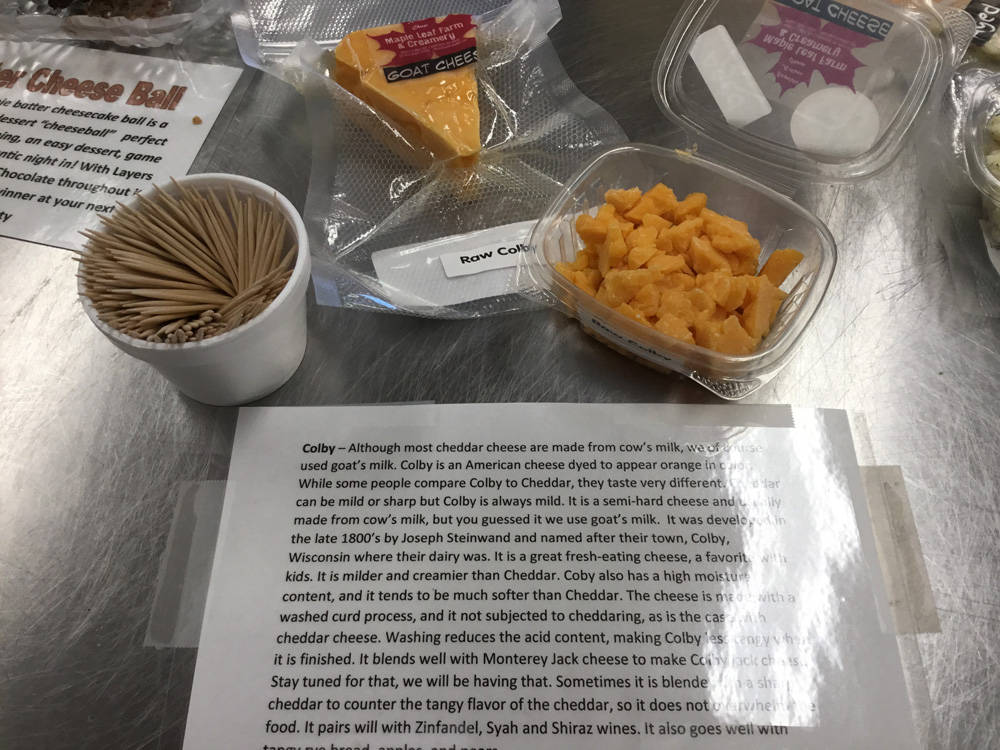 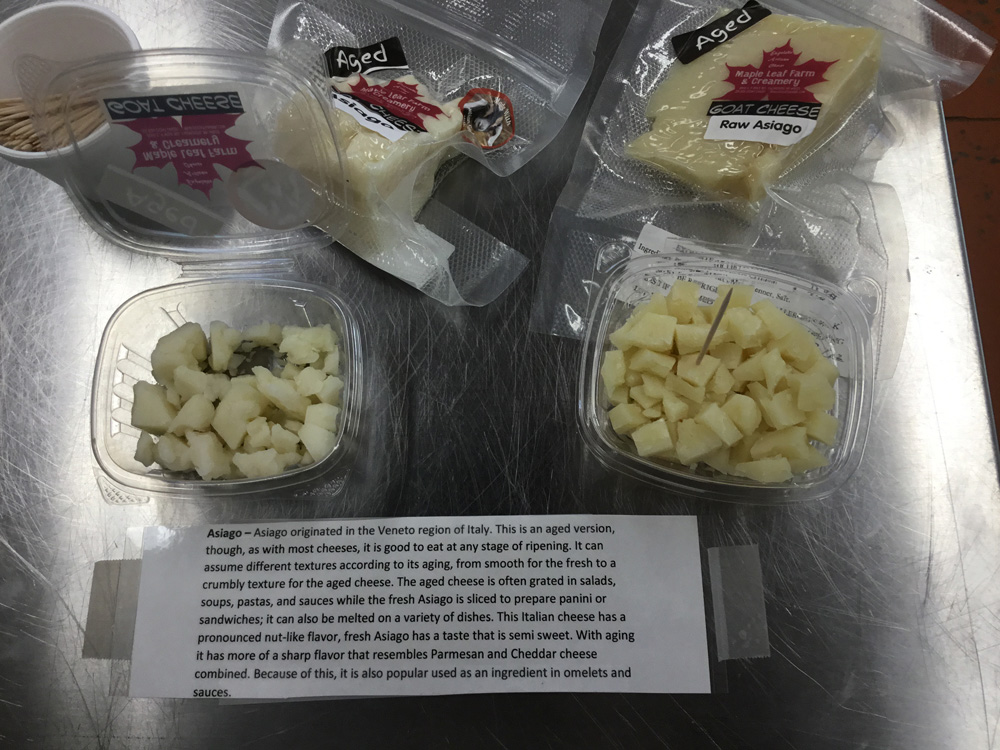 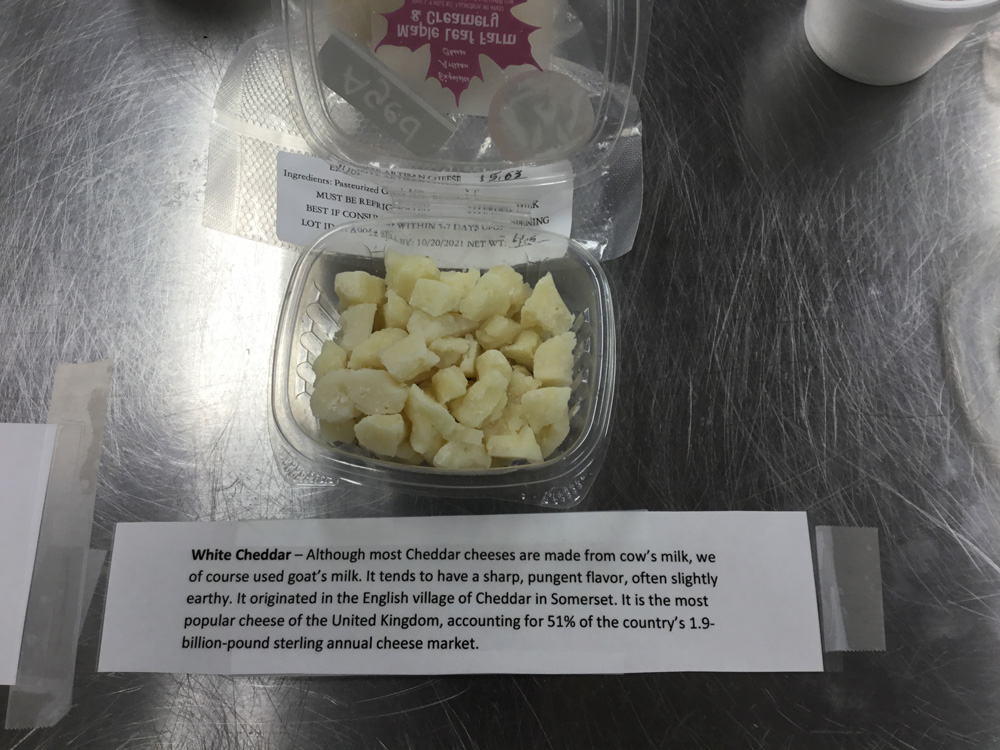 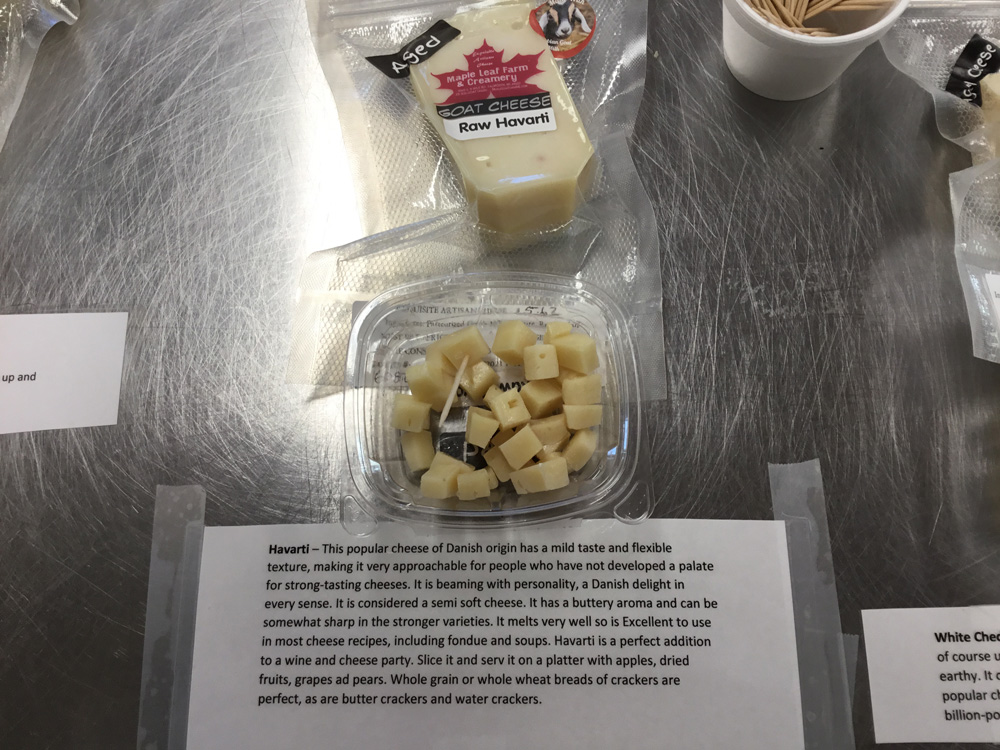 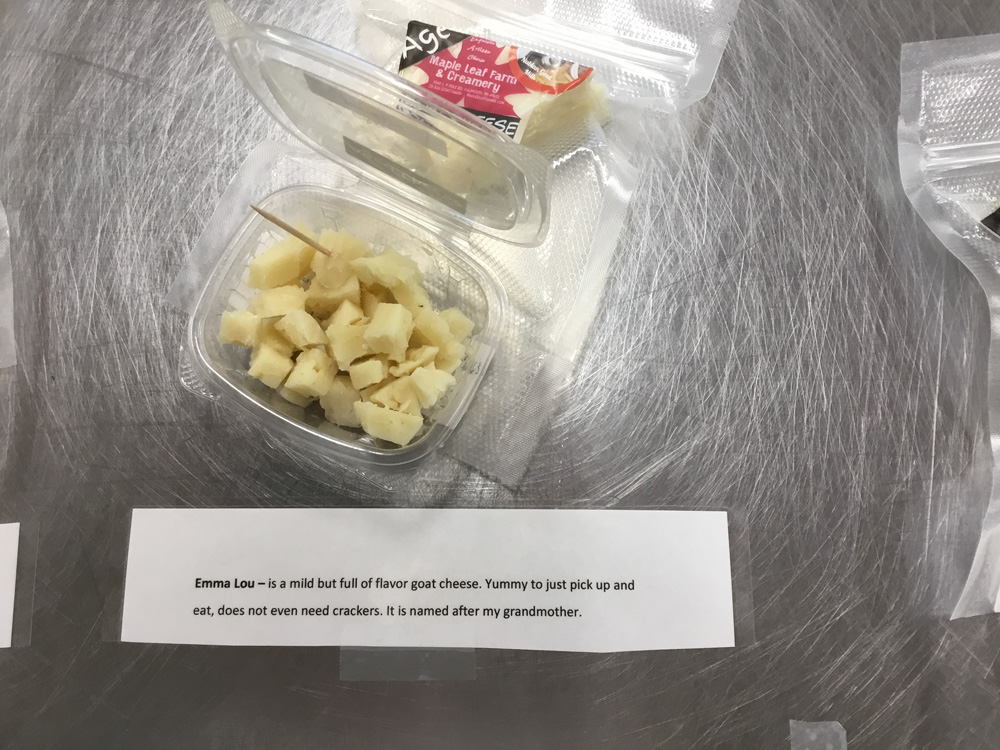 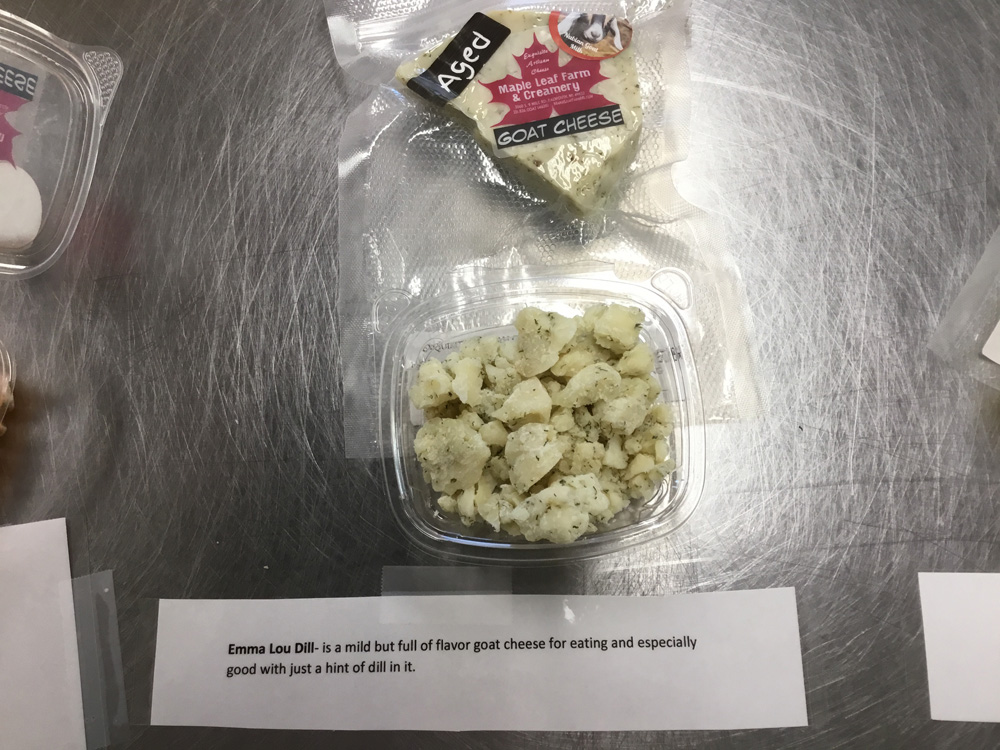 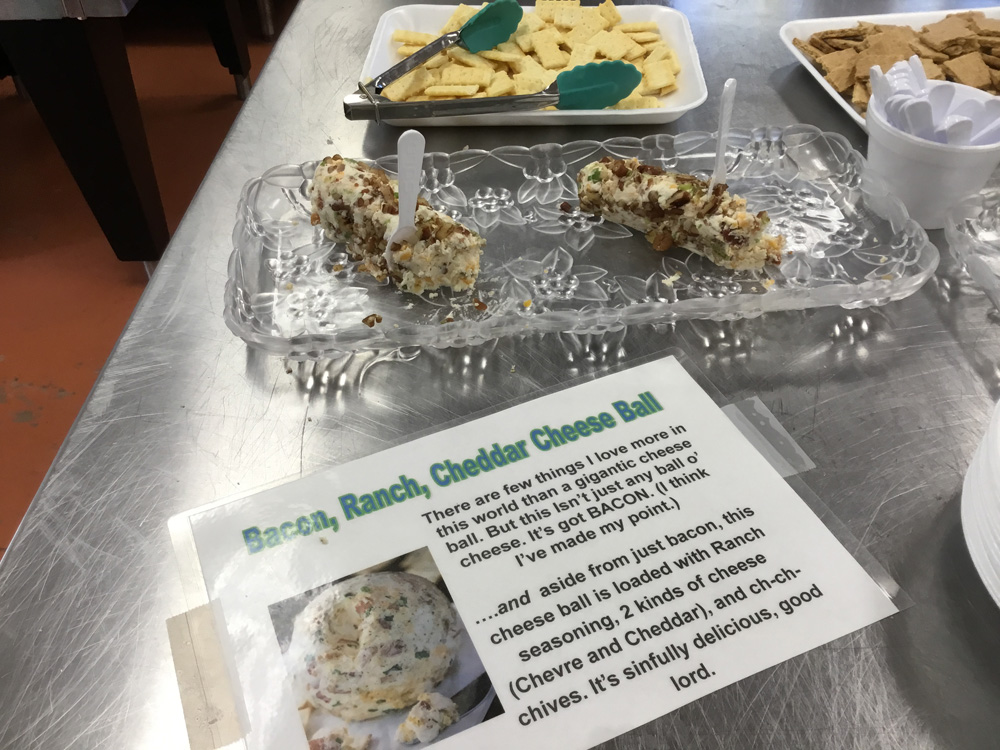 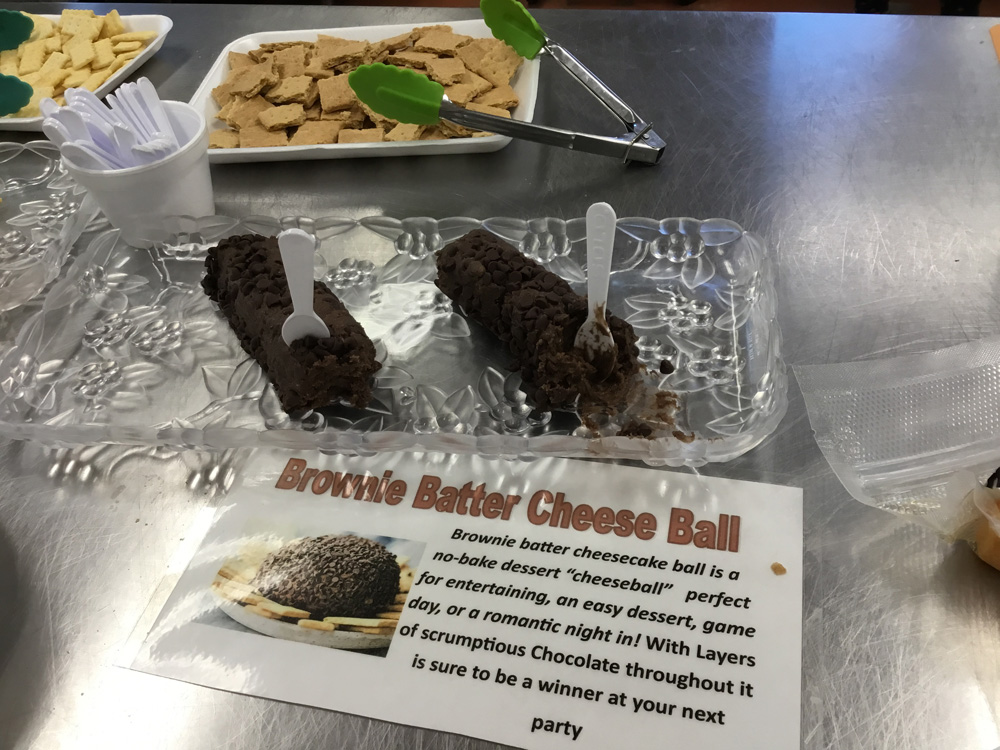 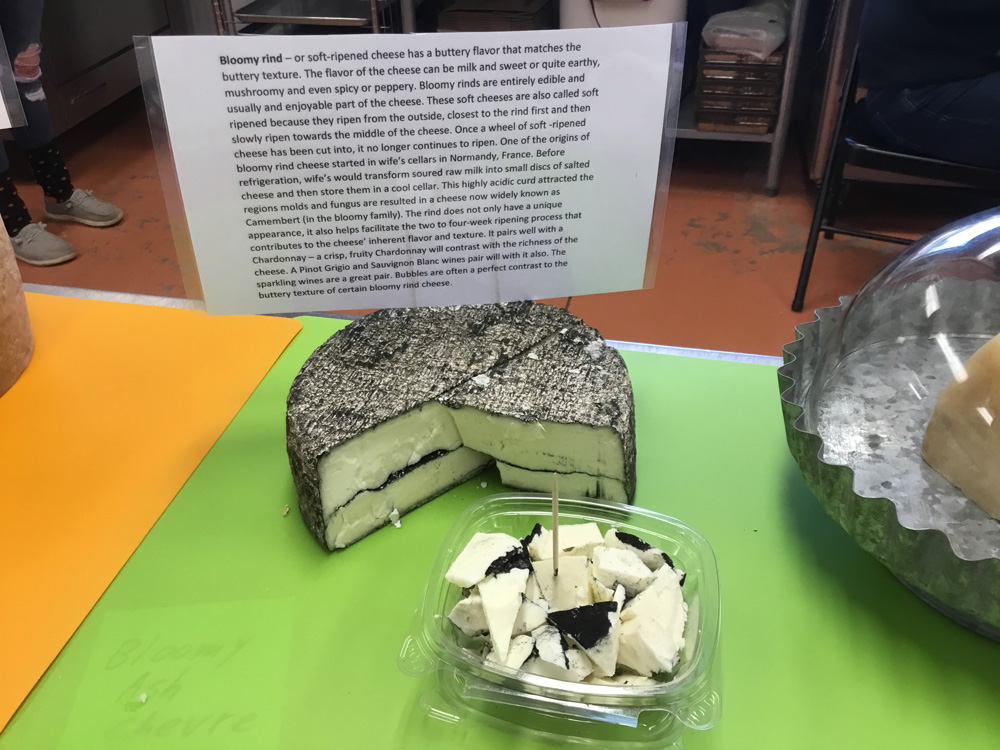 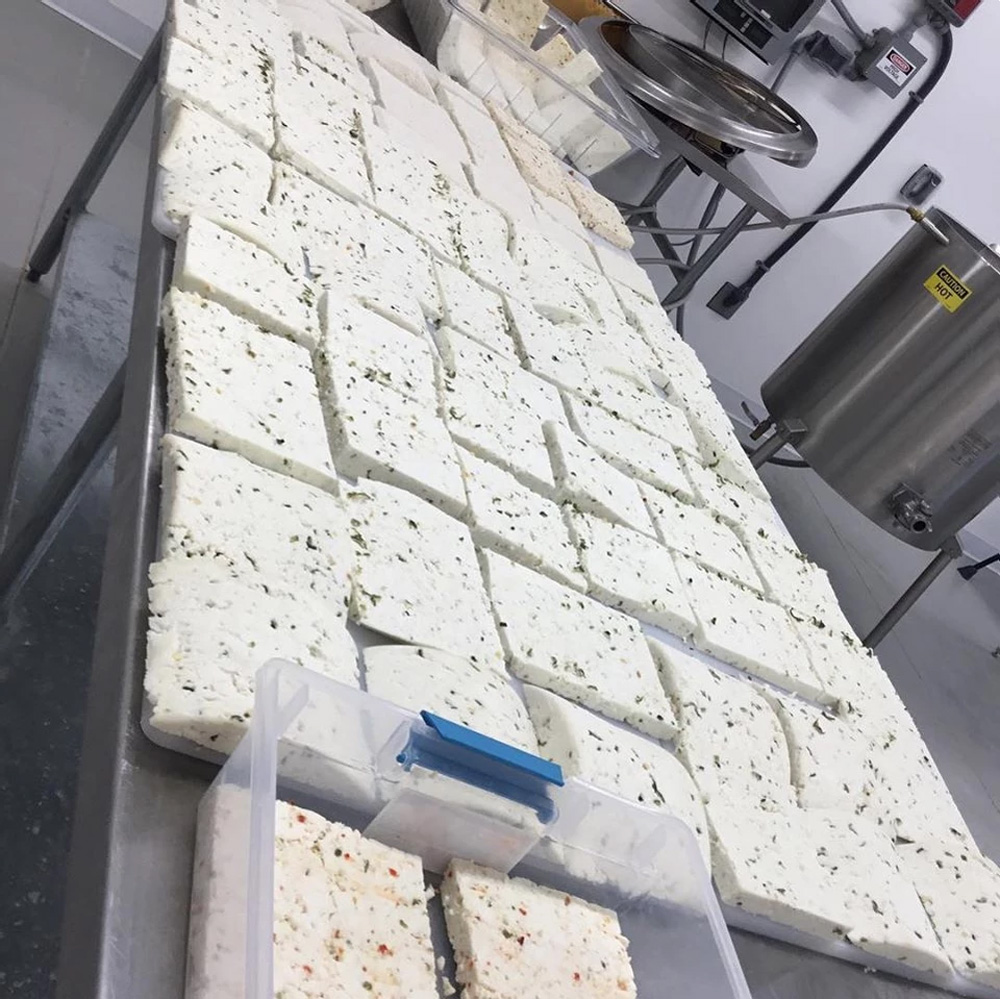